Over 11 years ago I stopped eating animals and for more than the last couple of years, I’ve stopped consuming animal-derived products. Why? Mainly because I no longer wanted to contribute to animal suffering.

Modern scientific research continuously shows that we don’t need to feed on animals or their by-products in order to be healthy, and that factory farming is having tremendous negative impacts on the environment. So why unnecessarily contribute to the unjust torture and death of innocent beings? It’s inhumane and utterly stupid.

Although scientific studies are important in shedding light on the issue, it seems that most people don’t easily change their habits — whether eating or otherwise — from information they receive on an intellectual level. We can keep on talking endlessly about how healthy it is to go plant-based, but people still want to eat their McNuggets, in the same way that we can keep on talking about how unhealthy it is to smoke cigarettes, but people still want their Marlboros.

On the contrary, what does wonders in motivating people to change their habits is that which touches their hearts — that is, what influences them on an emotional level. When it comes to saying “no” to the consumption of food derived from animals, the majority of people are moved to do so by things that make them feel empathetic towards animals.

As children, we all loved animals, enjoyed their presence, and felt empathy for them. I remember when I happened to experience for the first time a chicken having its throat slit right in front of my eyes. My heart was broken. I couldn’t believe how a human could cut the throat open of another living, sentient being just like that.

Now, as adults, most of us have become numb to the torture and brutal death all these animals have to suffer, just so that we can satisfy our appetite. But our empathy can be re-awakened, only if we place ourselves in the animals’ shoes and see things from their own perspective.

I’d like to present you here with some excerpts from a passage that I recently read, which will make you do exactly that. Found in the book The Ethics of What We Eat, as written by Peter Singer and Jim Mason, this passage vividly describes horrifying facts the chicken industry is desperately hiding from us.

Here’s how it begins:

Enter a typical chicken shed and you will experience a burning feeling in your eyes and your lungs. That’s the ammonia — it comes from the birds’ droppings, which are simply allowed to pile up on the floor without being cleaned out, not merely during the growing period of each flock, but typically for an entire year, and sometimes for several years. [1] High ammonia levels give the birds chronic respiratory disease, sores on their feet and hocks, and breast blisters. It makes their eyes water, and when it is really bad, many birds go blind. [2] As the birds, bred for extremely rapid growth, get heavier, it hurts them to keep standing up, so they spend much of their time sitting on the excrement-filled litter — hence the breast blisters. 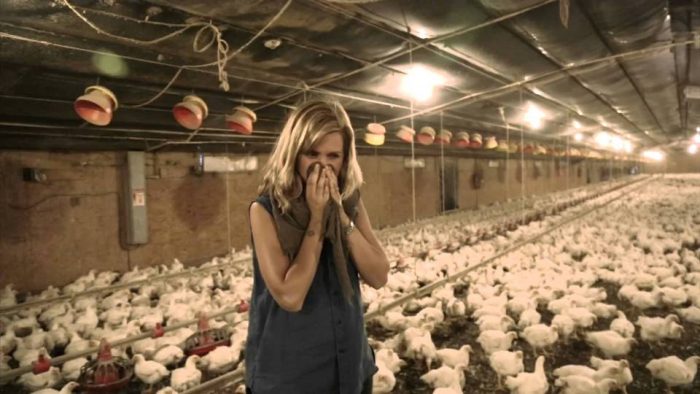 If you didn’t know, over many generations chickens have been bred in such a way so as to produce as much meat as possible in as less time as possible. In fact, chickens raised now are growing up to three times faster compared to chickens raised in the 1950’s, while feeding on just one third as much food. [3] Although this is great news from the chicken industry’s standpoint, it’s totally horrifying to the chicken, because, as studies show, the chickens’ bone growth is outpaced by the growth of their muscles and fat, which is immensely detrimental to their health.

One study found that 90 percent of broilers had detectable leg problems, while 26 percent suffered chronic pain as a result of bone disease. [4] Professor John Webster of the University of Bristol’s School of Veterinary Science has said: “Broilers are the only livestock that are in chronic pain for the last 20 percent of their lives. They don’t move around, not because they are overstocked, but because it hurts their joints so much.” [5] Sometimes vertebrae snap, causing paralysis. Paralyzed birds or birds whose legs have collapsed cannot get to food or water, and-because the growers don’t bother to, or don’t have the time to, check on individual birds-die of thirst or starvation. Given these and other welfare problems and the vast number of animals involved — nearly 9 billion in the United States –Webster regards industrial chicken production as, “in both magnitude and severity, the single most severe, systematic example of man’s inhumanity to another sentient animal.” [6]

You might be wondering: what is the reason behind that? Is it not in the interest of those who raise and sell the chicken to keep them well and healthy so that they can maximize their profit? The simple answer is no. Although, as the authors point out, it is true that chicken who die prematurely might cost the grower money, what truly counts is the total productivity of the shed. 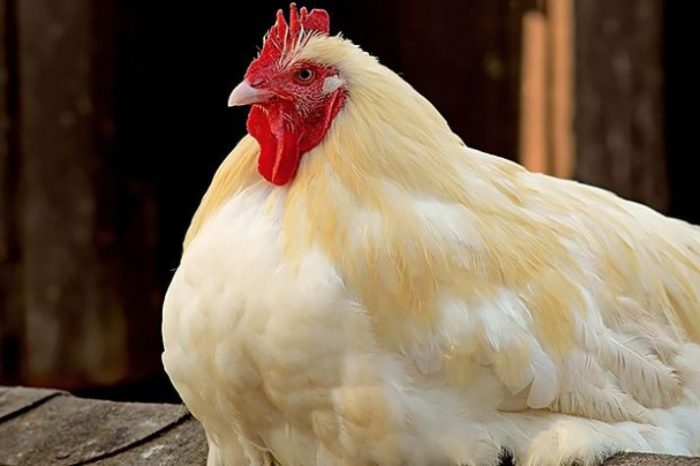 The authors go on to say that,

Breeding chickens for rapid growth creates a different problem for the breeder birds, the parents of the chickens people eat. The parents have the same genetic characteristics as their offspring-including huge appetites.

[…] The breeder birds must live to maturity and keep on breeding as long as possible. If they were given as much food as their appetites demand, they would grow grotesquely fat and might die before they became sexually mature. If they survived at all, they would be unable to breed. So breeder operators ration the breeder birds to 60 to 80 percent less than their appetites would lead them to eat if they could. [7] The National Chicken Council’s Animal Welfare Guidelines refer to “off-feed days;” that is, days on which the hungry birds get no food at all. This is liable to make them drink “excessive” amounts of water, so the water, too, can be restricted on those days. They compulsively peck the ground, even when there is nothing there, either to relieve the stress, or in the vain hope of finding something to eat.

The children of the breeding birds, according to the authors, live for only six weeks.

At that age they are caught, put into crates, and trucked to slaughter. To do their job more quickly, the catchers pick up only one leg of each bird, so that they can hold four or five chickens in each hand. Dangling from one leg, the frightened birds flap and writhe and often suffer dislocated and broken hips, broken wings, and internal bleeding. [8]

Then the journey starts. 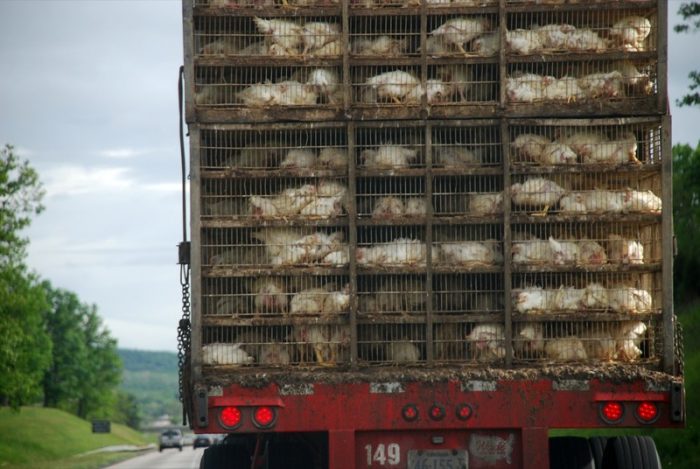 Crammed into cages, the birds then travel to the slaughterhouse, a journey that can take several hours. When their turn to be removed from the crates finally comes, their feet are snapped into metal shackles hanging from a conveyor belt that moves towards the killing room. Speed is the essence, because the slaughterhouse is paid by the number of pounds of chicken that comes out the end. Today a killing line typically moves at 90 birds a minute, and speeds can go as high as 120 birds a minute, or 7,200 an hour. Even the lower rate is twice as fast as the lines moved twenty years ago. At such speeds, even if the handlers wanted to handle the birds gently and with care, they just couldn’t.

The authors then proceed to write that,

In the United States, in contrast to other developed nations, the law does not require that chickens (or ducks, or turkeys) be rendered unconscious before they are slaughtered. As the birds move down the killing line, still upside down, their heads are dipped into an electric water bath, which in the industry is called “the stunner.” 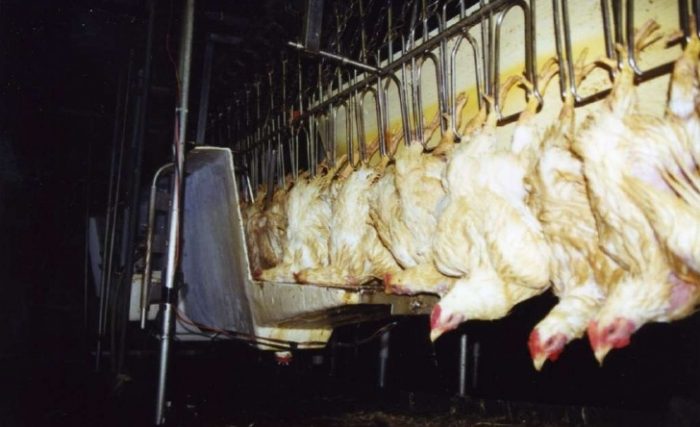 They state, however, that “the stunner” is a misnomer.

Dr. Mohan Raj, a researcher in the Department of Clinical Veterinary Science at the University of Bristol, in England, has recorded the brain activity of chickens after various forms of stunning and reported his results in such publications as World’s Poultry Science Journal. We asked him: “Can the American consumer be confident that broilers he or she buys in a supermarket have been properly stunned so that they are unconscious when they have their throats cut?” His answer was clear: “No. The majority of broilers are likely to be conscious and suffer pain and distress at slaughter under the existing water bath electrical stunning systems.”

Why is that so, you might ask. Why not make use of a strong electric current in the stunning procedure that can instantly bring the chicken to a state of unconsciousness? Here’s the simple yet horrifying explanation:

Using a current that would produce immediate loss of consciousness […] would risk damage to the quality of the meat. Since there is no legal requirement for stunning, the industry won’t take that risk. Instead, the inadequate current is used evidently paralyzes the birds without inducing paralysis is as good as inducing unconsciousness, for it stops the birds from thrashing about and makes it easier to cut their throats.

In fact, the authors point out that because of the great amount of birds that are being killed in tremendous speeds, even throat-cutting that comes after the electrified water bath doesn’t leave the birds unconscious before they proceed to the next stage of the process — a tank of scalding water.

I guess you are not aware of that, but according to documents obtained under the Freedom of Information act, up to three million birds a year are being boiled alive in the United States alone! [9]

How crazy is that?

But nobody seems to care. Who gives a shit about the animals? They are there solely for our own purpose, right?

I firmly believe that people support this insanity because they are acting out of ignorance and emotional numbness. But this can change, if the right information is presented to them, as well as a way that makes them feel an emotional connection to animals, like they used to as children. Then they would give a shit, and take no shit from any of those who are selling us lies for their economic gain.

I hope this article helped open your eyes (even if only slightly) to one of the worst realities of our time — factory farming — and made you re-consider your diet, as well as urged you to take conscious, responsible action to help put an end to the torture and death of billions of animals that is currently taking place behind the scenes of the food that’s on your plate.

8. I. J. H. Duncan, “The Assessment of Welfare During the Handling and Transport of Broilers,” In: JM Faure and AD Mills (eds.), Proceedings of the Third European Symposium on Poultry Welfare, (Tours, France: French Branch of the World Poultry Science Association, 1989), pp. 79-91; Gregory NG and Wilkins LJ, “Skeletal Damage and Bone Defects During Catching and Processing,” In: Bone Biology and Skeletal Disorders in Poultry. Whitehead CC, ed. (Carfax Publishing, Abingdom, England, 1992). Cited from A COK Report: Animal Suffering in the Broiler Industry.