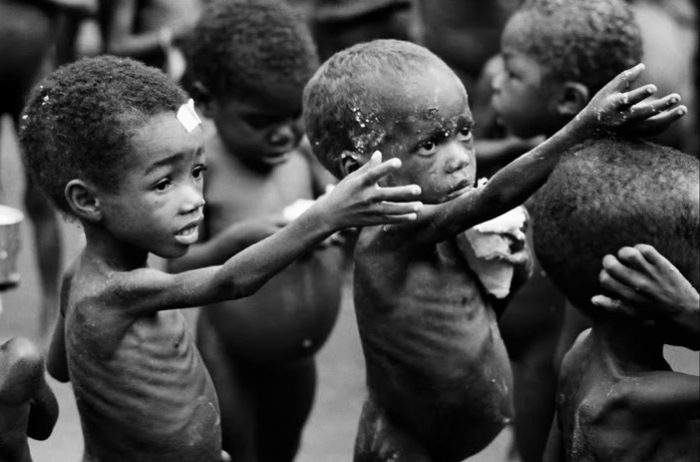 “Poverty is the worst form of violence.” ~Gandhi

“Only when the last tree has been cut down, the last fish has been caught, and the last stream has been poisoned, will we realize that we cannot eat money.” ~Cree Indian proverb

Having been conditioned by our economic system, most of us never stop for a moment to question it or consider its negative impacts on the world. Even worse, we are under the impression that it’s greatly benefiting us.

The reality, however, is quite the opposite, and here I’d like to share with you five ways our economic system is harming ourselves and the planet.

1. It leads to poverty

Although we possess the technical know-how and resources to provide food, clean water and shelter for each and every human being on earth, our economy systemically prevents us from doing so.

Why? Because, as every economist knows, money is scarce and hence not all people can have enough of it to meet their needs. In fact, according to statistical reports, about 40% of the global wealth is owned by 1% of people, while over 1 billion people are starving on this planet, which is unbelievable, considering that there is enough food for everyone and starvation isn’t caused by a lack of resources.

In a world where there is an enormous wealth gap between the higher and lower economic classes, it is inevitable that there’s going to be plenty of violence and conflict. Indeed, economic inequality is breeding violence, especially when both rich and poor people are living close to each other, showing how deeply the sense of injustice affects our psyche.

Research has repeatedly shown that an increase in unemployment, and hence poverty, is usually followed by an increase in violence. (Obviously, when someone doesn’t have enough to live decently, they feel compelled to act violently toward those who have more than themselves).

Moreover, child abuse as well as personal stress are more likely to be experienced by impoverished individuals, and have a direct correlation to both premeditated and impulsive acts of violence.

3. It gives rise to greed

In our economic system, money is needed by people so that they can pay the bills and survive. But since money isn’t enough for everyone, most of us are trapped in an endless competition for acquiring money.

And, since nothing can guarantee us that we’ll have enough money in the future, we never stop chasing it, regardless of how much wealth we possess. We always feel financially insecure, which explains why even millionaires, who have all the luxuries one can desire, still strive to make even more profit.

Our economic system is tremendously affecting our health, but most people don’t seem to recognize it. For example, due to the amount of poverty that prevails worldwide because of the inequality caused by our global economic system, over 1 billion of people are dying each year, with about 1.5 million children in poverty-stricken societies being killed from diarrheal diseases, which could be easily prevented and treated.

Studies have shown that people living in poverty are more likely to develop all sorts of physical health conditions, such as heart disease and obesity. That’s because of poor health habits that occur in lower income environments due to the lack of funds for better nutrition, medical attention and education. In addition, the poor are more likely to suffer from mental illnesses, such as depression and anxiety, due to high levels of stress caused by their harsh conditions of living.

Lastly, the way our economic system works is causing irreparable harm to our planet day by day, because of the need for cyclical consumption.

If people stopped buying as much stuff as they currently do, fewer sales would be made, which means that fewer jobs would be needed, hence more unemployment would be created. Now, assuming that consumption slowed down significantly, the economy would shrink dramatically and eventually collapse, resulting in hunger, violence, and disease. Therefore, in our economic system consumption is required to keep money flowing in the market.

The problem, however, is that the more we consume, the more resources we use. And since we’re living on a planet with finite resources, we currently take way more than what the earth can replenish, causing deforestation, soil erosion, biodiversity loss and a multitude of other environmental issues. In addition, the more we consume, the more waste we create, and where does that waste end up to? It ends up in nature, killing the sea life, destroying the soil, polluting the atmosphere and poisoning our food.

In other words, our economy is inherently unsustainable. And we have only two choices: to change it from its very foundations and live in alignment with our life-supporting planet, or to keep it as it is and destroy the world as well as ourselves along with it.

The above was just a short introduction to the topic. To get a better grip on what’s wrong with our global economic system, as well as what we can do to about it, click here.