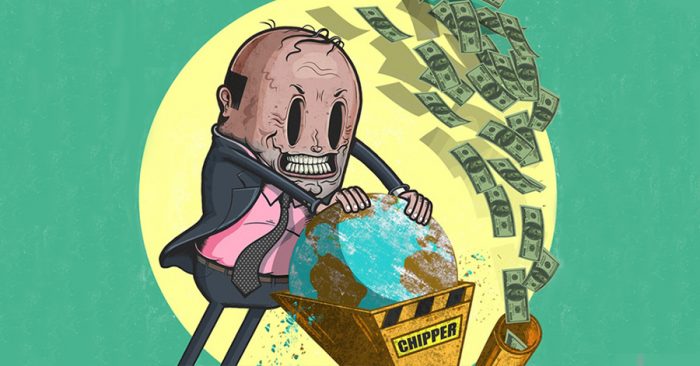 Most people are under the impression that our economic system — market capitalism — is a free system within which everyone can engage voluntarily and reap the benefits of their labor.

But how free the so-called “free market” actually is?

The following short story, written by social critic and activist Peter Joseph, shows the truth — and it’s quite ugly.


Tom wants an apple. John has an apple and offers it for $1. Tom counter-offers 50 cents. John re-counters at 75 cents. They agree. Sale. John decides this is a business he likes. But he notices other sellers are nearby. So, John needs to be competitive. One day John has some older apples that he normally doesn’t sell. But he thinks they are ok and really needs the income. Tom buys these apples – eats them – and gets sick. Tom returns to John and ask for his money back. John refuses claiming Tom has no proof it was his apples that made him sick. Tom calls his lawyer and sues John to pay for his doctor’s visit. John goes to court and loses. John learns a lesson about the power of government.

Yet, Tom wasn’t alone in reporting bad apples. Others besides John have also been selling bad goods, causing many lawsuits. So, government decides to set up an organization to regulate the production and distribution of apples. John, bothered now by costly new regulations that are threatening the profitability of his apple business, decides to befriend the regulators and offer money in exchange for leniency. They agree, albeit covertly, and suddenly John has even better profitability, with his competitors now at a disadvantage.

Over the next few years, John expands his apple business, buying up other shops in the region to limit competition. At a certain point, he is able to undercut just about everyone else around due to mass production, putting many small shops out of business. One of the people he put out of business goes to the government and complains that there is no way others can compete with John in the market. The official decides the man is correct and, under public pressure, forces John to break up his apple shop monopoly. John, who has become quite wealthy by this point, does not like this and quietly arranges for his executive friends to take control of the now divided apple shop monopoly. Then, in secret, the different shops work together to assure they get maximum returns by keeping prices fixed overall, creating a cartel.

Over time, John’s public stature in the community grows as he gives to charities, attends fundraisers and makes friends with government officials. John is happy. That is until it comes to his attention that a new apple shop is working to import apples from another town, posing a competitive threat. So, John, who gave generously to financially help a government friend get reelected, asks for a return of the favor. That being to increase the town tariff on apple imports, making sure the cost is high enough to ensure the other shop would no longer be profitable. It works. And John is happy again. But not for long. It appears John’s apple farm has been employing illegal workers and paying them very little. A gaggle of annoying human rights activists then come to his farms, causing a stink. John claims he was unaware of the illegal hiring and fires some of his staff as scapegoats. He then rectifies the situation, assuring his regulator friends it was all just an honest error.

Unfortunately, one of John’s former staff, upset by being fired, then goes to the authorities with legal documents and memos proving not only that John ordered to hire illegal workers but also revealing payments to the apple shop regulators, the conspiracy to assure cartel power, and the collusion with government officials for the tariff hike. John, after being found guilty on all counts, stands up to face the judge in court:

Judge: Do you understand the crimes you have been proven guilt of?

John: No Sir. I was only following the ethic of the free market.

Judge: Clearly you must have failed economics as you have engaged in government collusion, conspiracy, price fixing and illegal employment.

John: No Sir. I have simply let supply meet demand and voluntary choice decide each action.

Judge: So something like price fixing is not against the theory of free market practice? Last I checked a free market was to be free of interference and collusion?

John: No Sir. A free market is having the freedom to trade and compete as you see fit, buying and selling whatever you choose, with all parties voluntary in exchange.

Judge: That may be so, but your actions, such as conspiracy in tariff fraud, are clearly going against such principles as you are using force to stifle your competitors.

John: Your reasoning confuses me, Sir. All acts of competition exist to stifle and outperform competitors. Only voluntary exchange binds how the act of competition unfolds in a free market. One does not make your claim when a company purchases advertising, disproportionately exposing a consumer to an item over competitors. Using government to my advantage is the same thing.

Judge: So let me get this straight. You are telling me that the free market allows for the buying and selling of the very mechanisms designed to help regulate the free market?

John: That is correct Sir. The free market includes the freedom to the take away the market freedom of others through the act of competition.

Judge: Well, I’m sorry to break it to you John, but not everything in this world can be bought and sold. Our society was not set up to benefit those with the most money. Your sentence is 15 years in jail or a 50 million dollar fine.

The judge then drops his gavel in a bold sign of dignity and satisfaction. John pauses, grins in amusement and pulls out his checkbook. He pays the full fine, gets in his Ferrari and goes back to his mansion in time for a dinner party.

Welcome to the true free market.