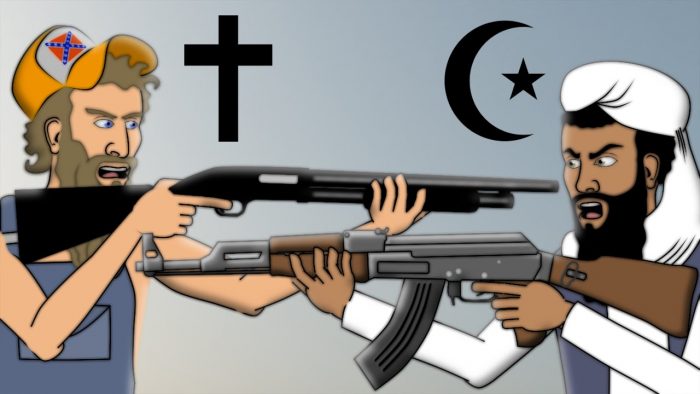 “If people are good only because they fear punishment, and hope for reward, then we are a sorry lot indeed.” ~Albert Einstein

Editor’s note: For simplicity reasons, the term ‘religion’ is used here to refer only to the dominant, especially Western, dogmatic, fear-based organized religions — not the esoteric religious traditions that do have a positive impact on the world.

There is only one difference: religion is masquerading as medicine, and while you think that it’s there for your benefit, it is secretly killing you. And before you become aware of it, religion has turned you into a lifeless being.

The negative effects of religion on society are tremendous (although often unrecognized), and in this article you’re going to read the main ways religion is destroying people’s lives.

So how exactly does religion negatively impact society? Let’s find out…

Religion is filling people with fear

Religion is one of the main reasons why people are afraid of living.

When I say ‘living’ I don’t mean just surviving. To survive is one thing–even stones do that–but to live is a completely different thing.

To live means to be sensitive, to discover your potential and achieve to higher states of being.

The problem, however, is that the starting point of religion is fear.

Religion is based on the idea of sin: all people are born sinners, impure souls, and if they don’t purify themselves, they will soon be condemned to hell by God, where they will have to experience eternal suffering.

In order to avoid being thrown into hell, religion demands that people prove to God that they are worthy of heaven.

How? By following the dogma of religion.

Naturally, when they are put in such a situation, they find themselves in a continuous state of fear. They are always afraid of whether their actions are right according to religion or not.

When you believe that you are being constantly watched by an all-seeing eye of God, you have to act in certain ways to please God. The fear of hell is always in your mind, filling you with worry and anxiety, and this does not allow you to live spontaneously.

As a result, religiously indoctrinated people become neurotic and in some cases even psychotic.

Religion is turning people against themselves

The demands that religion places on people are unrealistic.

Religion, on the one hand, teaches that people are born sinners. Sin is what we are made of, and whatever we humans are doing is bound to be corrupted in one way or another.

On the other hand, however, religion is teaching people to behave in the best ways possible — in a few words, to be perfect, just like angels.

But obviously people are not angels, so how can they act in such an unnatural way?

This has many serious consequences.

When you fail to do what God has ordered, you start hating yourself. You begin to accept the idea that you are indeed a bad person, corrupted, unworthy. And once you do so, your mind becomes filled with hatred, bitterness and resentment — a true hell on earth.

Religion is turning people against each other

Others are just a projection of yourself, a mirror, on whom you can see your own reflection. That’s why once you start hating yourself, you are bound to start hating others too.

When you accept the idea that you are a sinner, you start seeing those around you as sinners. As a result, you fear that those you meet want to harm you — they are also evil, ill-willed, enemies of yours.

In addition, you will not tolerate religious ideologies that are different from the one you hold.

To identify with a religious ideology and call it the only truth and way, can only lead to tremendously bad or negative effects — prejudice, bigotry, and all kinds of violence (just think of how many wars have been carried out throughout history in the name of God and religion).

Religion is keeping people in ignorance

To live means to learn, and life is an ongoing lesson.

When, however, you have grown up conditioned to believe what is right and wrong according to a religious dogma, and you’ve been taught that to doubt the religion you were born into means to go to hell, naturally you become afraid of seeking knowledge. You stop searching to find truth, and hence to educate yourself and grow as a human being.

Knowledge and wisdom are incompatible with dogmatic religious ideologies. Indeed, religion is confining people’s minds in the darkness of ignorance, and those who are in search of the light of truth are being condemned by religion.

This way, religion keeps people blinded by all sorts of beliefs that are not based on any factual or experiential evidence, which does wonders to stunt their intelligence.

As you can see, the negative effects of religion on society are enormous.

To blindly follow a religious or any other ideology simply means to restrict your perception, suppress your thoughts and emotions, and live in hypocrisy — in other words, to live in pain and misery.

Many people choose to follow a religious dogma, even though they’re suffering from this choice, simply because religion frees them from personal responsibility.

To live spontaneously one has to take responsibility for oneself, and this can be quite burdensome.

Life is made up of choices, and to make the right choices isn’t always that easy. So people prefer not to chose for themselves but to have others choose for them. They prefer to walk on paths made by others, instead of creating and walking on their own paths.

“Only sheep need a shepherd.” ~Voltaire