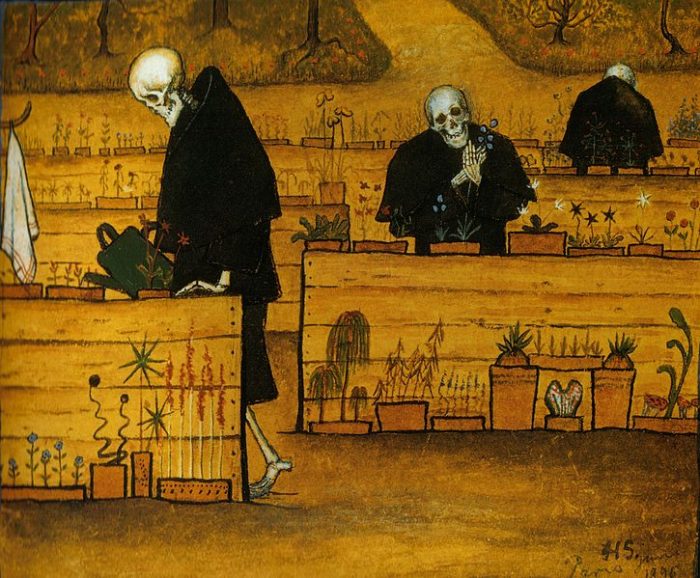 The Garden of Death, by Hugo Simberg

A few days ago, as I woke up early in the morning and looked right in front of me, I saw my girlfriend lying fast asleep beside me. I observed how beautiful she looked and thought of all the good times we had together over the last two and a half years. Shortly afterwards, the idea that at some point in the future she won’t be here with me anymore crossed my mind. Not that she’s planning to move away — far from that. But just like any person alive, she is a traveler passing temporarily through this world.

That morning I was reminded of how impermanent life is, and that no matter how granted we take someone, sooner or later death (which is nothing but a process of life) will take him or her away from us, regardless of how much we might not like this to happen.

Death is always there, standing patiently by our side, accompanying us in every step we take, and at any moment we might suddenly lose ourselves in its embrace. And one thing is certain: we’re all going to die.

Life’s journey might be quite unpredictable, but that part of it called death isn’t. Sure, we might not be able to tell when exactly we’re going to die, but we know without doubt that we will. In other words, death is inevitable, and as I like to say, the very moment we were born we were sentenced to die.

Yet most of us don’t like to think about death, and even pretend like it won’t happen to us any time soon. For years upon years we constantly hear about others dying around us, yet we blindly believe that we’ll not be the next ones to die.

We don’t pay much attention to the power death has upon us, not because we don’t care about it — on the contrary, we care so much that the very idea of death scares the hell out of us. Or, to put it differently, death scares us to death! No wonder we’re doing anything we can to avoid thinking about it. 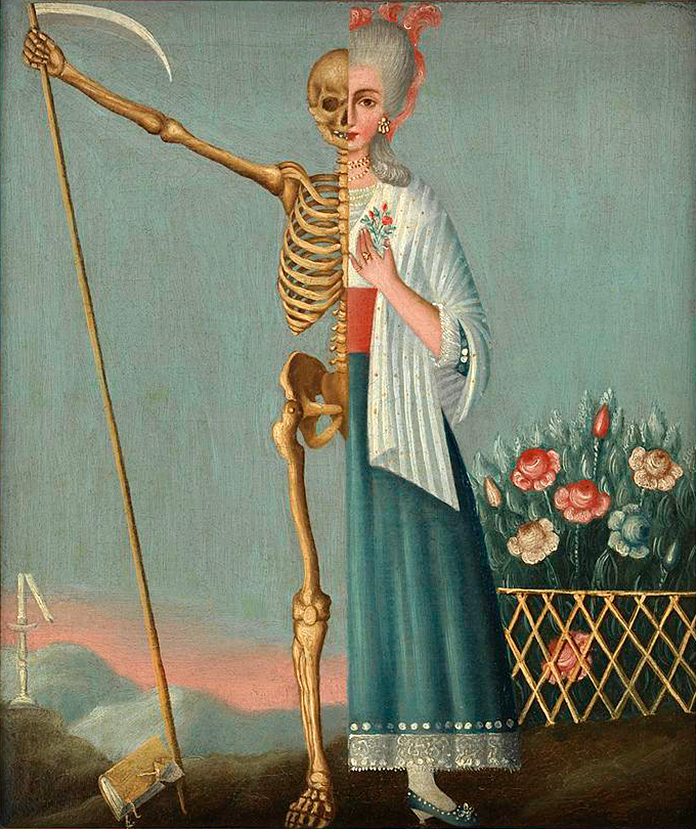 Recall the last time you had an in-depth conversation with someone about death. It mustn’t have been quite recently, right? Then ask yourself how many times you’ve had such a conversation in your life. I bet they weren’t that many, or am I wrong?

Death is a taboo subject in our culture, something we shouldn’t openly discuss. But why exactly is that? Why does death frighten us so much that we don’t even find it appropriate to talk about it?

The answer is attachment. We are so attached to the kind of life we’re used to living that we cling to it as much as we can, to make sure it won’t flee from us. We’re attached to our partners, our possessions, and many other things we’d be devastated to lose. We want them to belong to us, and we do our best to keep them in our lives.

Yet, all of our efforts are in vain. Life is ever-changing, continually moving, flowing, and no matter how hard we try to control it, it always disappoints us by escaping our tight fist of clinging and taking its own unpredictable course. And eventually death will unapologetically take all that we have away from us, leaving us with empty hands, not having anything left to hold on to.

Discussing death reminds us of this harsh truth, and we don’t dare to face it. We run away from it like it’s our worst enemy, but in the end it always appears in front of us, staring us with its paralyzing look straight into the eyes. When, for example, a loved one dies, most of us are at a complete loss, unable to cope with the situation. Death finds us unprepared, and we’re so shocked by it that we feel as if the ground is shaking under our feet.

Death doesn’t affect us only occasionally in difficult times like this, but also in our day-to-day life. When we don’t dare to face and accept death, the idea of death is constantly haunting us, and this creates tremendous emotional turmoil in our psyche. Our desire to control life’s natural flow is filling us with anxiety, and as a result we are unable to let go, relax in the here and now, and enjoy life to the fullest.

There’s a good reason why all the great spiritual masters talked about the importance of confronting death in order to realize and accept the impermanence of life. The Buddha, for example, recommended corpse meditation. That’s why in earlier times Buddhist monks would go out in the forests in search of a human corpse, and when they found one, they would sit right in front of it and meditate on death, in an effort to familiarize themselves with their own mortality. “This body, too,” they would say about their own bodies, “such is its nature, such is its future, such is its unavoidable fate.” 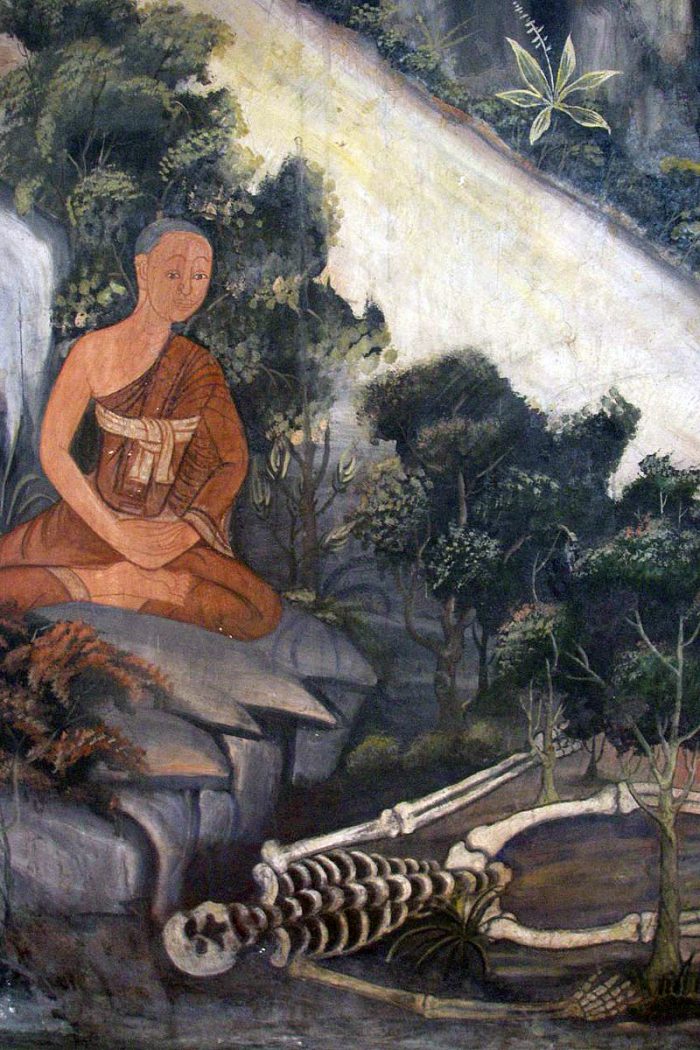 Today, it’s common for Buddhist monks to practice meditation on death by looking at photographs of deceased people. In fact, in various places of the East many of them even carry photographs depicting corpses or bodies in various stages of decomposition (interestingly, in some countries like Thailand such photographs can be purchased at religious shops) and take them out many times throughout their day — even while they’re eating!

This might sound a bit crazy to most people, especially to Westerners, but I don’t think it’s crazy at all. That’s because meditating on death can actually help us to live a better, richer life. Firstly, by realizing the transitory nature of our existence, we can learn to appreciate the gift of life and make the right use of it. In addition, we can learn to deal with change. Then, we will never be unprepared for death, and we’ll be able to relax from our constant effort to control people and situations. We’ll learn to flow with the river of life by adapting to its ways, instead of fighting against it and putting ourselves into unnecessary trouble.

As Edmund Wilson said, “death is one prophecy that never fails.” And with each breath we take, we’re a bit closer to death. So we’d better get ready for the moment we’ll reach our destination. But we needn’t be depressed about the fact that we’re going to die. Realizing life’s fleeting nature can actually be invigorating — it helps put things into perspective, allowing us to cut down on the unnecessary and focus on what truly matters.

That’s what I was reminded of that early morning when I thought that my girlfriend and I won’t be together for much longer: to appreciate that she’s now with me and fully enjoy her presence for as long as I can. Instead of feeling sad about what the future will inevitably bring, I feel grateful for having the luck of being with her and for all the beautiful moments we’ve shared in the past.

Ultimately, all relationships are short-term relationships — they end quickly, even if they last for a lifetime (considering the infinite vastness of time). And just like death will take our partners away from us, it will also take away our material possessions. In fact, they were never ours — we only borrowed them from existence, and that just for a short while. So, let’s savor what we’ve got while we can and make the most of out of our lives, by immersing ourselves in the present moment and squeezing all the good juice out of it.