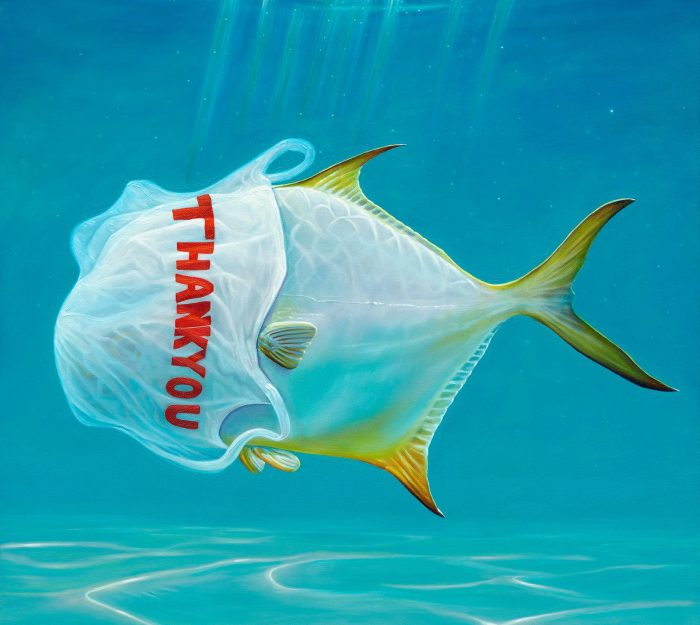 On March 8, 2014, a tragic event happened: While Malaysia Airlines Flight 370 was on its way from Kuala Lumpur to Beijing, it suddenly vanished from the radar screens. For weeks, no one could detect the aircraft. In search of signs of wreckage, experts looked at satellite images. One day, they came across an image showing a bunch of objects floating on the surface of the sea that resembled scattered aircraft parts. For a while, they thought that they found what they were searching for. But upon further examination, they were totally surprised. Instead of the missing aircraft, it was a huge pile of plastic trash.

Humans consume hundreds of billions of kilograms of plastic every year — and demand is constantly growing. Most of that plastic — if not all — sooner or later ends up in the land or the oceans, poisoning natural habitats and the countless beings that live in them.

Each year, about 8 billion kilograms of plastic make their way to the world’s waters. As a result, millions of marine animals are killed by ocean plastic, and it has been estimated that about 700 marine species have been affected by plastic pollution. But those aren’t the only victims. Seabirds and mammals are killed by plastic too. How? In various ways, such as by being strangled by discarded fishing nets or six-pack rings and by eating plastic.

It’s not only the smaller animals that die from plastic, but the bigger ones too — even as big as whales. Indeed, not too long ago a couple of whales were found dead — one in Italy and the other in the Philippines — both of which had their stomachs filled with indigestible plastic bags. And only a few months ago, a sperm whale died in Scotland with a 100 kg “litter ball” in its stomach, consisting of plastic items such as fishing nets, packing straps, rope, plastic cups and bags.

Nowadays, plastic waste is present in nearly every part of the world. In the words of marine biologist and researcher John Hocevar: “We’ve found plastic everywhere we’ve ever looked. It’s in the Arctic and the Antarctic and in the middle of the Pacific. It’s in the Pyrenees and in the Rockies. It’s settling out of the air. It’s raining down on us.” Plastic bags, sweet wrappers and other objects can be found even in pristine terrestrial environments, such as the polar icecaps, and as far as seven miles deep in the Pacific Ocean’s Mariana Trench — the deepest place in the ocean.

Most of the plastic that we consume is chemically-made in such a way that it’s extremely hard to biodegrade to its constituent molecules. In fact, experts estimate that it takes from 400 to over 1000 years until plastic completely biodegrades.

As bulk plastics break down over time, they at some point take the form of microplastics — that is, plastics that are smaller than half a centimeter (but can be so small that they’re no longer visible to the naked eye). “Microplastics have been found everywhere in the ocean that people have looked”, journalist and author Laura Parker writes, “from sediments on the deepest seafloor to ice floating in the Arctic—which, as it melts over the next decade, could release more than a trillion bits of plastic into the water […] On some beaches on the Big Island of Hawaii, as much as 15 percent of the sand is actually grains of microplastic.” And, in the words of reporter and author Tim Dickinson, “This pollution is planetwide, impossible to fully remediate, and threatens to disrupt natural systems — including those that allow the oceans to remove carbon from the atmosphere.”

But microplastics aren’t just found “outside in the world”. They’re inside our bodies too. Believe it or not, the average human being ingests nearly 2,000 microplastics a week, whether from water, food, or the air. Disgusting, right? Well, other than disgusting, it’s also extremely unhealthy. Here’s why: Because of how plastic is manufactured, many of those tiny plastic particles that we ingest are mixed with hazardous chemicals (such as colorants, flame retardants and plasticizers) that are linked to hormone disruption, developmental delays and even cancer.

As you can understand, the effects of plastic pollution are devastating. The planet — and that includes ourselves — is drowning in a sea of plastic, because of our own actions. The question, then, is: Why exactly do we keep on producing and consuming plastic, as if there’s nothing wrong with it?

Have a look around you and you’ll see that most of the things we use or own — clothes, furniture, electronic gadgets, automobiles, and so on — are at least partly made of plastic. But why exactly is that?

Here are the two basic reasons:

The first one is low cost of production. The raw materials of plastic (e.g. cellulose, coal, natural gas, salt and crude oil) are cheap and available in vast amounts. In addition, plastic is extremely versatile, so nearly anything can be created out of it. On top of that, plastic doesn’t take much time to be mass-produced. Hence, corporations can cut down on their production costs and sell products of all kinds at affordable prices. And since business as we know it is profit-oriented, it makes absolute sense that plastic exists in nearly every product that is sold to us.

The second reason is consumer convenience. Because a lot of plastic products can be bought at a very low price, consumers usually have no problem discarding them — even if they could last for years or even decades. In fact, about 40% of all plastic produced is for single-use purposes. Single-use plastic products include plastic bags, packaging boxes, cups, straws, and cutlery. People tend to throw them away right after using them only for one time, while feeling a sense of freedom from the “drudgery” of maintaining them in good condition. Soon afterwards, they buy new products of the same kind, only to use them for a short while and throw them away as well.

It’s immensely saddening that merely because of convenience and monetary reasons, people are filling the entire world with toxic plastic waste. But what’s even more saddening, perhaps, is that most don’t even seem to realize the devastating impacts our relentless plastic consumption is having on the planet.

The Myth of Plastic Recycling

Corporations and governments alike have been selling us the idea that plastics can be recycled, and most of us have bought into it. As a result, we buy plastic products without end and throw most of them into the recycling bin, believing that we don’t add to the problem of plastic pollution.

The truth, however, is that just a tiny percentage of plastics can be recycled — and only temporarily. Eventually, all plastics end up in nature, poisoning the Earth and the 8.7 million animal species we share it with. 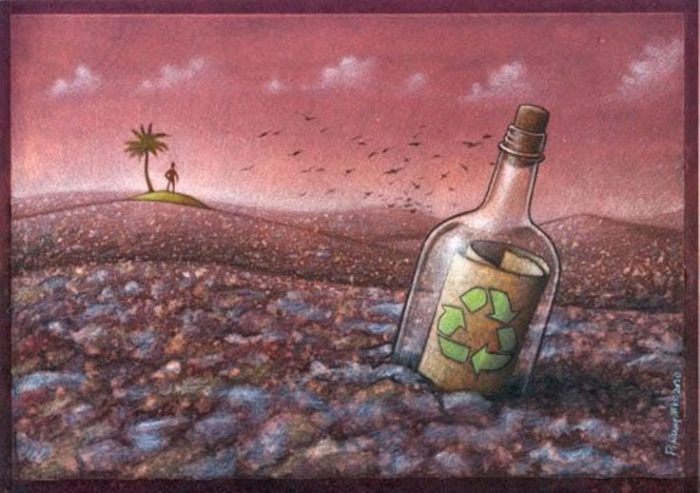 Regenerative designer and inventor Russell Maier offers a glimpse of how environmentally destructive the common “recycling” process is:

In nature, when a leaf falls from a tree, 100% of its nutrients biodegrade and are recycled (in the true meaning of the word) back into the local ecosystem. This all happens within a few dozen square meters. When a plastic bottle is tossed into a blue bin it begins a process of a fundamentally different sort: a high-energy journey around the planet, bouncing from one factory and superstore to another where it inevitably crash-lands into a distant ecosystem.

He then continues by showing how PET plastics — that is, the most commonly used “recyclable” plastics in consumer products — aren’t, in fact, fully recycled:

Whereas 100% of a tree’s leaves are recycled, not all PET bottles are. A significant percentage is lost– either someone put it in the wrong bin or the sorting plant missed it. Likewise, a percentage are too worn or dirty to be recycled back into PET. In this case, it is recycled into a lower form of plastic (like plastics #2, 3, 4, 5, 6, 7). Maybe a bottle cap. Maybe a plastic bag.

In other words, recycling doesn’t avoid, but only delays, final disposal. But even if it did avoid it, a 2017 study found that, of the trillions of kilograms of plastic waste that the world has created since 1950, only 9% has made it to the recycle bin. And, remember, plastics tend to persist for at least hundreds of years.

If current trends continue, it’s estimated that by 2050 plastic will outnumber fish in the oceans, and that there will be about 12 billion metric tons of plastic in landfills (to give you an idea of how big that amount is, imagine the Empire State Building 35,000 times heavier). So, I’m wondering: Is this really the kind of world that we want ourselves, our children, and all other beings on Earth to live in?

The End of Plastic Pollution

If we want to stop poisoning our planet, we need to put an end to plastic pollution. To achieve that, we have to work on four different levels:

Firstly, as individuals we need to minimize our plastic consumption. If you think about it, so much plastic is produced only because there’s great demand for it. If demand for plastic is decreased, its production will decrease too. Hence, each one of us can help reduce plastic pollution by simply limiting our consumption of plastic as much as practically possible. I want to highlight the word “practically”, since at this moment, in a world where plastic is all-pervasive, it’s nearly impossible for the vast majority of people to live entirely plastic-free. But we can still make a big difference by choosing to avoid consuming plastic products as much as we can.

Secondly, we need to disincentivize corporations from producing plastic. The main reason why corporations produce so much plastic is because of how cheap plastic is. But, as we’ve seen, its hidden costs are enormous. Yet, instead of those costs being paid by corporations, they are being paid by the victims of plastic pollution — that is, the people, the animals and the rest of the natural world. Hence, corporations need to be heavily taxed for their anti-environmental behavior. This way, they won’t have a financial incentive to create plastic products anymore, and will be forced to start using more eco-friendly materials in their manufacturing process.

Thirdly, we need to transform our economic system. It’s easy to put all blame on corporations for the immense harm they’re causing to the world. The truth, however, is that those corporations aren’t evil entities whose mission is to destroy the planet. Rather, they just want to gain competitive advantage in order to succeed in a predatory, profit-driven economy that’s based on endless consumption and growth. In such an economy, even if we removed the world’s most polluting corporations, sooner or later others will inevitably pop up and take their place, since the motivating forces behind corporate anti-environmental behavior will still be there. Hence, unless we transition from our toxic economic system to an environmentally-friendly one (I discuss more about how that could be achieved here), the problem of plastic pollution (and pollution in general) won’t be resolved.

Lastly, we need to help spread awareness about plastic pollution. Most people aren’t aware of the impacts of plastic consumption. One reason for this is that they tend to live far away from dump sites and don’t walk the ocean shorelines where most of the plastic ends up. Hence, they consume plastic products without second thought and throw them into the recycle bin to have their conscience clean, not realizing that they’re contributing to the destruction of our planet. Hence, sharing information about plastic pollution and how to end it is of utmost importance for making change. The fact that you read this article until its very end shows that you’re a deeply caring person. So, if you got something of value out of it, please consider sharing it with your friends and family. Ultimately, this is how social change always starts: By a few caring people raising awareness about issues that matter.