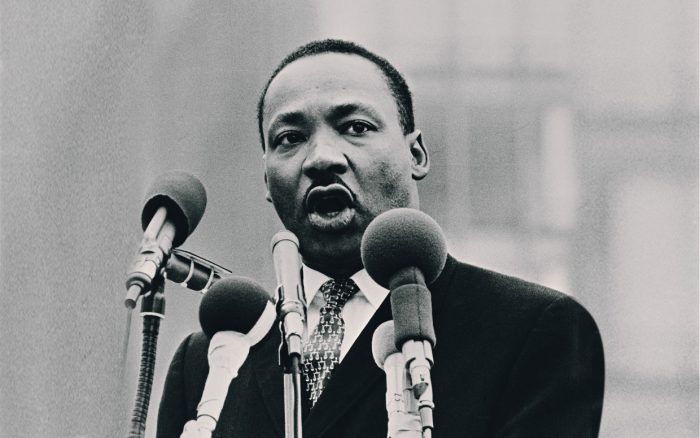 Martin Luther King, Jr. has undoubtedly touched the hearts of millions of people from around the world, mainly through his powerful “I have a dream” speech given in 1963.

“I have a dream that my four little children will one day live in a nation where they will not be judged by the color of their skin but by the content of their character.”

King strived to see a world without discrimination and prejudice, but unfortunately even 53 years after he delivered that speech, speciesism, classism, and racism, among other forms of discrimination, still prevail.

2. “There comes a time when one must take a position that is neither safe, nor politic, nor popular, but he must take it because conscience tells him it is right.”

5. “Faith is taking the first step even when you can’t see the whole staircase.”

6. “Only in the darkness can you see the stars.”

8. “No person has the right to rain on your dreams.”

9. “In the end, we will remember not the words of our enemies, but the silence of our friends.”

10. “Forgiveness is not an occasional act, it is a constant attitude.”

12. “Nothing in the world is more dangerous than sincere ignorance and conscientious stupidity.”

14. “Those who are not looking for happiness are the most likely to find it, because those who are searching forget that the surest way to be happy is to seek happiness for others.”

15. “Our lives begin to end the day we become silent about things that matter.”

16. “There comes a time when silence is betrayal.”

17. “No one really knows why they are alive until they know what they’d die for.”

20. “I have decided to stick to love. Hate is too great a burden to bear.”