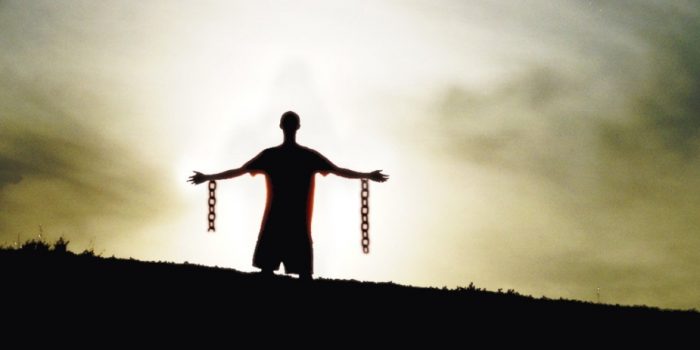 What does a hooligan, a kamikaze, and a racist have in common?

They all don’t use their brain much.

But it’s not only they that don’t. In fact, most people are no different when it comes to this.

Sure, we all have our thoughts, and over the years have formed certain opinions. But how many of those opinions are merely beliefs resulting from unconscious social conditioning, and how many of them are based on our own understanding? And, of course, we know a lot of things, but how much of our knowledge comes from personal experience, and how much from parrot-like learning?

You see, from almost the day we were born, we’ve been forced to not think. Take school, for example — an institution that supposedly helps children develop their intellect yet does quite the opposite.

School forces children to stay confined in a classroom for about 8 hours nearly every single day for a total of (more or less) 12 years, where they learn things they don’t enjoy learning, where they obey to authority figures, where they unquestionably accept what they’re being taught, and where they aren’t allowed the freedom to do pretty much anything on their own (even to go to pee) without asking for permission first.

As Pink Floyd would say, school conditions children to become “another brick in the wall”.

The official 1982 video clip of Pink Floyd’s Another Brick in the Wall.

I know, I’m generalizing here, since not all schools are the same. But the reality is that in most parts of the world school isn’t a place where critical thinking is stimulated — on the contrary, it is suppressed or simply ignored. Naturally, it atrophies and becomes weak, exactly like a muscle does when pressure isn’t exerted upon it.

Observe the people around you and you might come to see the consequences of our educational system. They are living unconsciously, not knowing why they think and behave the way they do. They accept and act without second thought on what the media is presenting them as the truth. They believe in and follow religious dogmas without having any solid evidence supporting their beliefs. They wholeheartedly support political leaders and obey to the decisions those make without the slight resistance. I could go on forever giving similar examples, but these will suffice for now.

As a result of our social conditioning, corporations exploit our emotional insecurities so they can sell us their products and services, making us compete with our fellow humans about who has more stuff. So-called journalists are selling us lies by utilizing propaganda tactics through the mainstream media, turning us into mindless puppets. Priests and religious teachers of all sorts gain power by selling us heaven in the afterlife, dividing us into in-groups and out-groups that fight against one another in the name of god. And politicians gain power by selling us heaven on Earth, also splitting us into opposing groups that fight against each other in the name of ideology.

If we realize these negative consequences, and are truly willing to change our way of living for the benefit of ourselves and the world, we need to develop the courage to escape the herd mentality and start thinking for ourselves — and the sooner we do, the better.

Of course, that’s easier said than done, since our social conditioning has gone very deep and is affecting us in ways we can’t even recognize. However, with conscious, persistent effort, it’s definitely possible to do so. If you’re interested to know how exactly, here are some basic practical steps you can take right now:

Question your beliefs, no matter how much you cherish them.

To release yourself from the prison of social conditioning, the first and most crucial thing you need to do is question any beliefs that you unconsciously took on from your parents, teachers, and culture. That’s because beliefs can bring all kinds of limitations in life, such us irrational fear and the sense of having to live according to what’s right for someone else but not for you.

No matter how much you might cherish a belief, ask yourself the following questions:

Assuming that you consider yourself to be religious, and you believe that the dogma of your religion is the only true and right one, and that those who hold different belief systems to yours are evil and doomed to go to hell, ask yourself:

– “What is the logical basis for holding these beliefs?”

– “Did I reach to them through my own understanding, or did I just accept them as truth merely because I was indoctrinated as a child?”

– “Are they serving my happiness or are they contributing to my suffering?”

These are some very important questions that you need to ask about any beliefs that you might hold in dear faith, whether they’re concerning religion, philosophy, politics, economics, or another field of knowledge. By doing so, you’ll decondition yourself from negative social programming, which will allow you to grow in understanding, take in emerging information and make wiser choices. In addition, you’ll be able to better understand others’ beliefs without judging them based on a fixed mind-set. 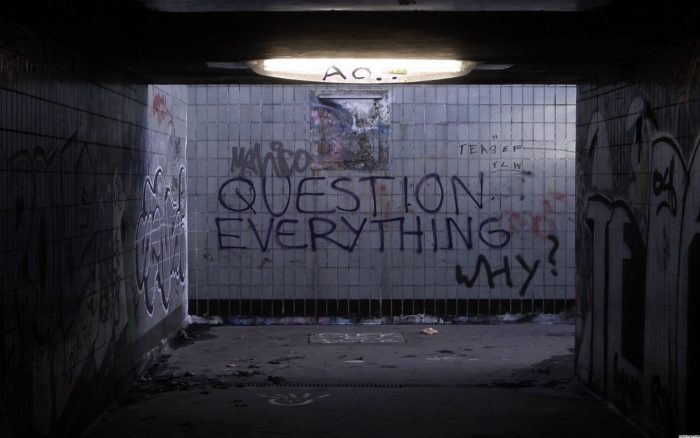 Doubt is the beginning of wisdom.

Never be afraid to question your beliefs. To doubt what you think you know is a sign of intelligence, and only those who are courageous enough to do so can break free from the shackles of social conditioning and walk on the path of wisdom.

Rebel against authority and accept responsibility for your life.

For most of us, it has become a habit to have others tell us what to think and how to behave. We don’t think for ourselves — instead, we let others do it for us and take responsibility for our lives. Not surprisingly, we are intellectually weak and have lost control over our lives.

It seems that we allow others to dictate us how to live because we don’t want to take the burden of responsibility on our shoulders — so we throw it on them. To be responsible for your life can be troublesome, because you have to use your mind a lot, take important decisions and face failure when you make the wrong choices. To avoid that, most of us choose to let other people — such as politicians and religious leaders — do those things for us, as if they are our saviors. Then, we blame them for neatly anything that’s going wrong with our lives — it’s only their fault, we claim, without stopping for a second and think that perhaps it’s actually ours. 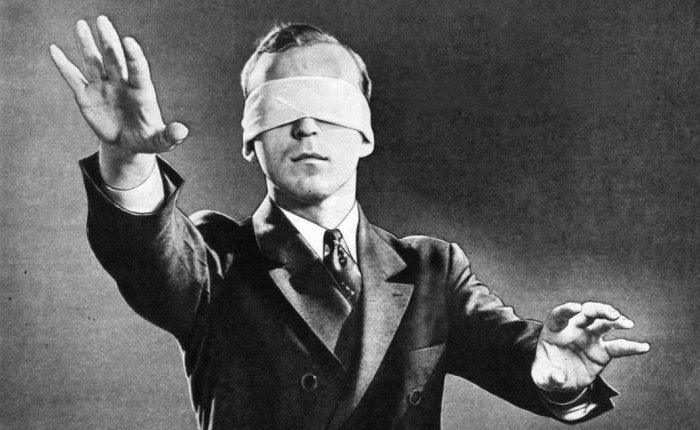 Are you courageous enough to remove the blindfold of faith?

If you want to escape the matrix of social conditioning and reclaim your freedom, you need to stop letting others control you like a mindless automaton and instead start being responsible for your life. This might be a difficult thing to do, yet it’s the only way to choose your own path in life.

Seek truth, regardless of how arduous that might be.

If you’ve questioned your beliefs, chances are that you’ve come to the realization that most of them were just imposed on you by society and don’t in fact reflect your personal experiences and understanding. And although this does wonders to help you develop your critical thinking skills and break down the walls of social conditioning, it doesn’t always answer the question of whether those beliefs actually hold any truth or not. To answer that, we need to seek truth by doing our own research.

Let’s take drug addiction as an example. Our social conditioning has led most of us to believe that drugs are causing addiction. This is a belief we hold since our early childhood but rarely does one of us stop for a second to contemplate if it’s true. Yet if we do some basic research on the issue, we’ll come to find out that, although drugs certainly do play a significant role in addiction, they aren’t actually causing it; rather, taking drugs is merely a symptom of addiction. According to health experts, emotional trauma has been identified as the root cause of addiction, whether we’re talking about addiction to pornography, video games, gambling, or drugs. If you weren’t aware of this, and would like to find out more about the nature of addiction, here’s an illuminating talk for you:

“Everything you think you know about addiction is wrong.” -Johann Hariss

The problem is that people don’t usually like to think for themselves and do any research. One reason for that is that they find it exhausting and not worth their time. Another reason is that they find it threatening to their worldview. You see, when people are attached to certain beliefs that aren’t based on critical thinking and evidence-based understanding, doing research might prove them wrong, and so many choose not to seek the truth at all, lest it will shatter their beliefs. Thus, living in ignorance yet thinking they know, they can’t grow into wiser individuals and are unconsciously spreading untruths.

If you’re a lover of wisdom, you’ll need to actively search for the truth, no matter how difficult that might be. You’ll need to think a lot and educate yourself. You’ll need to read books, watch documentaries, listen to talks, take part in discussions or use any other tools that can assist you in your journey to expanding your understanding of reality. Lastly yet most importantly, you’ll need to be ready to accept the truth when you encounter it, even if it contradicts your long-held beliefs. 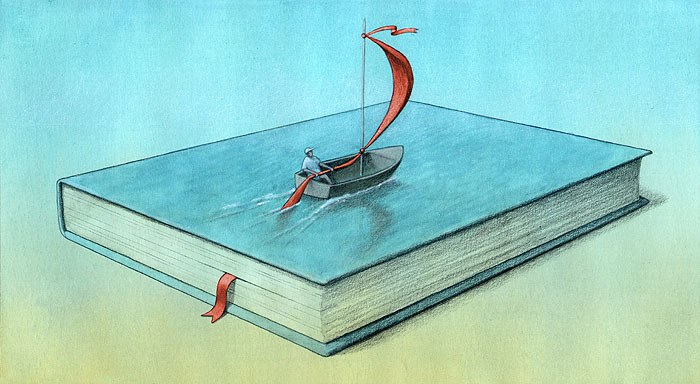 The journey to truth might at times be rough, but it’s definitely worth taking.
Image credit: Pawel Kuczynski


By questioning your beliefs, rebelling against the herd mentality and thinking for yourself, you’ll be able to free your mind from the constraints of blind conformity and dogmatic ideology. This way you’ll be able to better understand yourself and the world you live in, as well as to take responsibility for your life, without being easily fooled, exploited or manipulated.