Most of us, if not all, love to connect with other people. We love to have others to share our thoughts, emotions and experiences with, to feel part of a community, to feel that we belong to something greater than ourselves. And that sense of connection and belonging is contributing greatly to our happiness and well-being.

Those among us who have been lonely for a long time know well how bad it feels to have no one in life, to feel disconnected and alienated. I used to be one of them, luckily only for a short while. Perhaps you were or still are one of them too.

Research shows that those who are lonely tend to be more stressed, and hence unhealthier than those who feel connected, both physically and mentally. Lonely people have a much higher risk of developing a wide array of diseases, including cancer, heart disease, obesity, respiratory conditions, depression, anxiety, and the list goes on and on. A study found that loneliness affects people as much as smoking 15 cigarettes a day. And another study found that people who are chronically lonely are 50% more likely to die prematurely than those with healthy social relationships.

This is how lethal loneliness is. Yet sadly, over the past few decades, people have become increasingly disconnected from each other. Currently, about half of US citizens feel lonely and isolated. And the problem is similar in many other countries around the world.

Interestingly, at the turn of the 21st century – perhaps at the peak of humanity’s social disconnection – social media suddenly appeared out of nowhere, and it made a big promise. It promised that it would break the walls between people and allow humanity to come together. It promised that it would bring us closer to old friends and family members we had lost touch with. It promised that it would enable us to easily meet interesting people from nearly every part of the world. It even promised us intimacy and love. And guess what? This promise resonated with hundreds of millions of people. Being thirsty for connection, they believed that social media is exactly what they were hoping for. So, they jumped into it without second thought.

At the beginning, social media seemed great, but over the years it became crystal clear to many that it failed to offer most of what it had promised. Although it was connecting people on a superficial level, on a deeper, essential level it was, generally speaking, separating them. In fact, it was bringing them against each other. So, what could have gone wrong?

There are several reasons. Firstly, people started to spend more time on social media, which means that they had less opportunity to go out of their homes and meet people in person. Yes, on social media people might be able to instantly communicate via text and image with multiple people from nearly any part of the globe (which, of course, is a great technological achievement), but true, intimate connection is missing from that. No text message or emoticon can replace the feeling of being in the same physical space with someone else, looking into their eyes, feeling their touch, sensing their presence. Yet social media still does provide some solace to those with lonely hearts, which is what keeps them returning to it. It provides a substitute of connection, which, although never enough, it temporarily soothes their pain.

Another way social media helps to separate people is by breeding social polarization. Most people don’t realize it, but the truth is that today’s popular social media platforms are profit-making machines, who’re earning tens of billions of dollars in ad revenue from essentially selling people’s attention. Hence, to sell as much of it as possible, they have to be designed in such a way to keep people engaged in them. And what’s one of the best ways to increase engagement? Playing with people’s emotions, such as by promoting polarizing content that divides people in opposing groups who fight endlessly in comment sections. Something that the big social media platforms are doing very well. Which makes one wonder: Is social media “social” or actually “anti-social”? 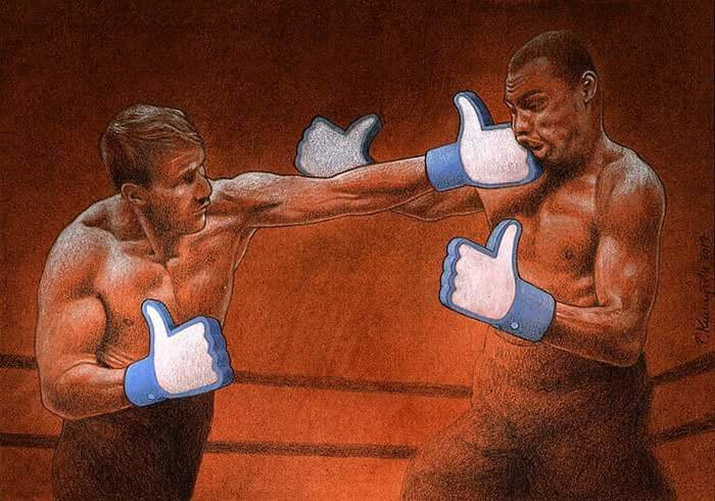 To make things worse, most social media platforms methodically filter what they show their users, according to each user’s behavior. So, if, let’s say, the social media algorithm detects that you have a certain political affiliation, it will show you as much content related to it, preventing you from being exposed to different political ideologies or groups of people affiliated with them. As a result, social media creates an informational echo chamber that further alienates people from each other.

There are many other ways social media disconnects and polarizes society, but I won’t go into them in this article. Rather, at this point I would like to state that I’m not against social media per se. I might not like social media as it exists today, but I don’t think that it’s inherently bad. In fact, I like many aspects of it, and believe that it could play a big positive role in the evolution of humankind. The problem that I find with social media concerns how its platforms are set up, and with what intention people are using it. Social media could be an immensely powerful tool in bringing people together, but it will always let us down if we think that it can substitute intimate, in-person physical relationships. Social media could also enable people to engage in a free flow of information sharing, if social media platforms were designed for the benefit of its users, and not with the end goal of profit-making.

Then, a revolution in consciousness would likely begin. But for that to happen, our values need to change. Social media technology as it exists and is commonly used today is nothing but a reflection of our collective values, and unless those change, social media won’t change either.